Skip to content
You have not yet selected a nib unit.
Your pen will be shipped with an empty section.
Are you sure you wish to proceed?
Click NO to return and choose a nib unit.
YES NO
Home » News » Around the world they write with our fountain pens 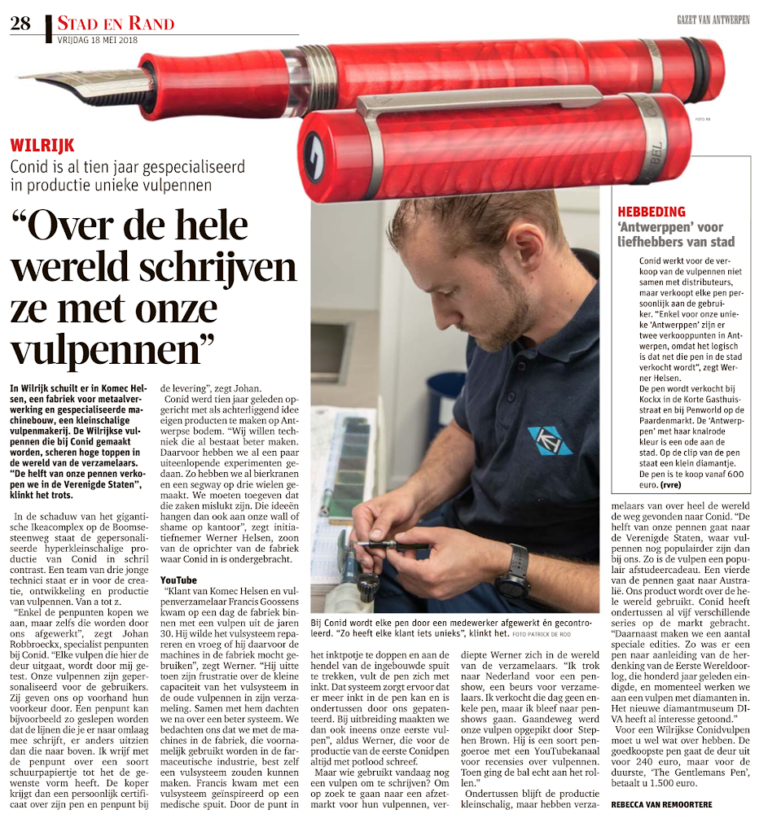 Conidpen in the Belgian press

Not long ago Conid made it to the newspapers (After our interest in designing a pen dedicated to Jozef Cavens, who was in the newspapers earlier this year), Rebecca, a journalist for Gazet van Antwerpen, showed interest in the entire Conid story. She came by to get a grasp of our company, and eventually produced a page-long article about our pens, philosophy how everything came to existence.

Rebecca writes about how a relatively small company, hidden behind giant megastores like Ikea, has built up an international reputation in the fountain pen world.

We provided a short translation of what got published:

“We only purchase our pen tips, but even those get their finishing touch at Conid”, says Johan Robbroeckx, our nibmeister.

“Every fountain pen that leaves these premises, gets thoroughly tested by me. Our fountain pens are personalized for every user,  who provide us with their personal preferences. A pen nib can for example be ground in that way, that the lines you write downward look different from the lines you write upward. I finetune every pen nib until it has the desired shape. The buyer then gets a personal certificate for his pen and nib when it arrives at home.”

Conid was founded ten years ago with the underlying idea to design our own products of Antwerp origin. “We want to improve techniques that already exist for a while. We already did a few exciting experiments. We for example have designed an innovative beer tap or a Segway on three wheels. We however have to admit that those ideas have failed. Their designs are now hanging on our Wall of Shame at the office”, says Werner Helsen,  the son of the founder of Komec Helsen, Conid’s mother company.

“Client at Komec Helsen and fountain pen collector Francis  Goossens one day entered the company with a fountain pen from the early ‘30s. He wanted to fix the filling mechanism and asked if he could use the machines in the company”, Werner explains.

“He then complained about the small filling capacity of old fountain pens in his collection. Together we then brainstormed about a better system. We figured that with the machines in our company, which are mostly used for the pharmaceutic industry, we could make our own filling system. Francis came up with a filling mechanism inspired by a medical syringe. Through dipping the nib in an ink well, and pulling the handle of the built-in syringe, the pen can fill up with ink. In addition, we also made our very first fountain pen,” according to Werner, who claims to have always written with a pencil before the production of the first Conid Bulkfiller.

In the mean time, collectors from all over the world have found their way to Conid. “Half of our pen production goes to the United States, where fountain pens are still widely used. It’s a popular gift for a graduating son or daughter, for example”.

Australia is also an important customer, purchasing over 25% of our production.  Conid has now brought out over 5 different collections. “Next to those classic collections, we also design several special editions. We developed a pen dedicated to the commemoration of the centennial of World War I. Right now, we are working on a fountain pen embroided with diamonds, in honour of Antwerp, the diamond capital.”